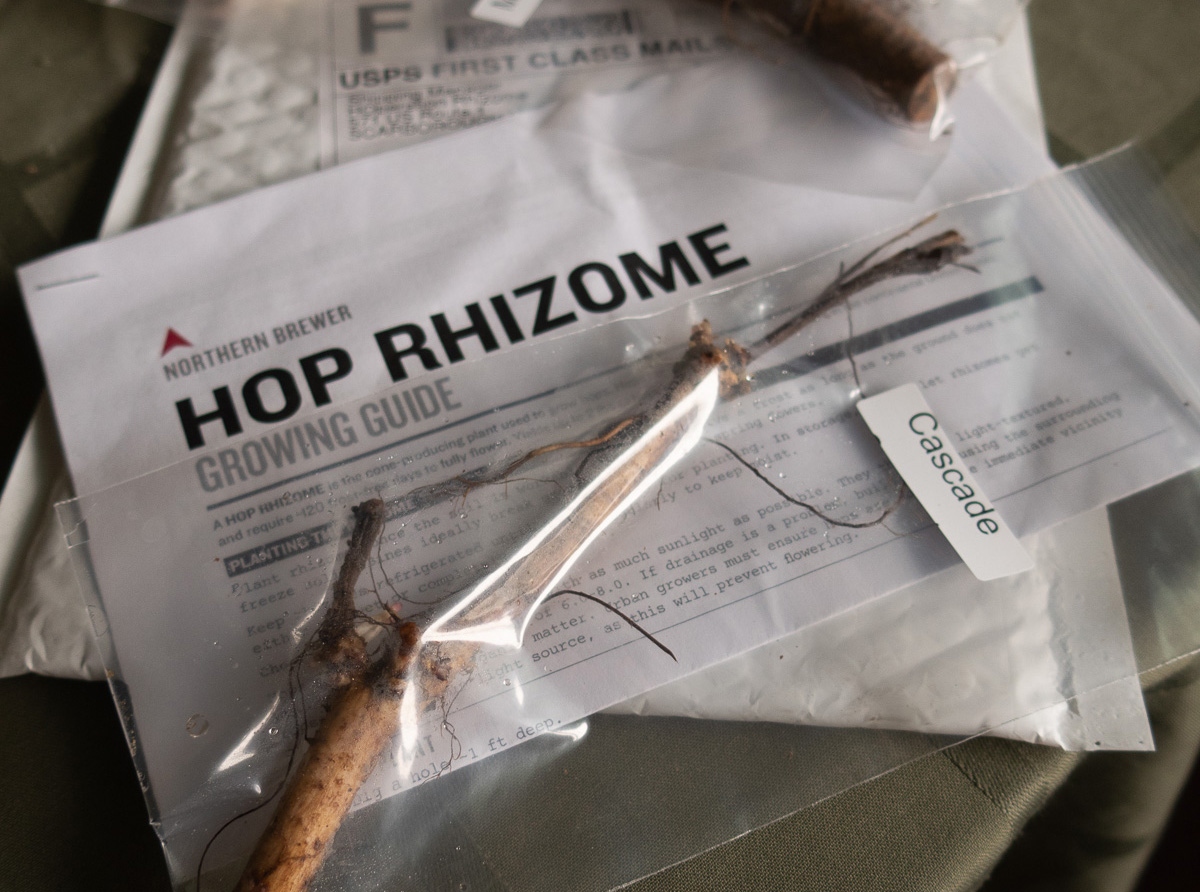 Do you brew? Home brewing is a great mix of cooking and socialization, great for shy folks (like me!) who need an excuse to invite people over. And what’s more fun then making beer while also drinking it, with friends?

If you brew, you know about hops. They have all sorts of interesting names, like Willamette, Cascade, and East Kent Golding. Each hop variety is known for certain aspects of its flavor (e.g. grassy, spicy, floral, citrusy), and those aspects are different depending on when you use the hops in your Brew. There’s hops added for bittering early in the boil, for flavor later in the boil, and for aroma at the very end of brewing. You can even add hops to your wort after it has cooled, usually sometime during fermentation, known as dry hopping. These imbue an intense flavor and aroma of fresh hops into your beer.

So, if you brew with hops, why not grow your own?

Benefits of Growing your own Hops

Hops are not expensive if you brew infrequently. But, if you brew a lot, or, if you make the same recipe over and over again, you might find that $2-$5 per ounce of hops is a bit steep, especially if you use a lot of hops in your beer (IPAs, I’m looking at you!).

Growing your own hops, you can expect a few ounces of hops flowers in your second year, and, as the rhizome grows, more and more hop vines will grow you more hops.

Hop vines are also fairly easy to grow, require little to no attention or fertilizer, and grow quickly (up to a foot a day). They’re not too picky about soil as long as it drains well, so if you have a nice sunny spot in the Bay area with enough room for the eventually wide root system, you should succeed.

How to Order Rhizomes

Hops are grown from rhizomes, which are like a small piece of root that is starting to sprout new stems. They are sold at one time of the year each year, between February and May, which is conveniently the right time to plant them in the Bay Area.

While I have started to see hops available from some planting companies, sometimes they do not even identify the variety of hop, which makes it completely useless for brewing since hop flavor aspects vary so much. Be sure you know what kind of hop rhizome you are buying, and track where you plant it in your garden.

The one garden distributor I would recommend is Territorial Seed Company, which even offer a four pack of hops that will give you a good range of flavor for your beers.

More Beer, located in Los Altos, will take orders early in the spring and call you when they are ready for pickup.

I’ve purchased rhizomes from all three of these suppliers and have found the quality to be excellent, the instructions that they come with to be perfect, and really can’t complain about any of them.

Rhizomes need to be planted in healthy, well-draining soil, about 4 in below the surface. You can mix some general fertilizer into the soil before you plant, but do not overdo it. I like to just mix in some compost.

When choosing the space for your hops, consider the following: hops need to set up a significant root system (after a few years), so small pots will not work long-term, but larger ones, or a half barrel, should do fine. The area should be in full sun. And, hops need something to grow on, like a fence or trellis. They can get really long, but die back completely in the winter to the ground.

I recommend protecting the area you planted your rhizomes in from digging creatures like raccoons and cats, by placing something over the soil like bird netting, a tomato cage, or forks sticking up out of the soil. I’ve lost two rhizomes in my time, once to a curious child (not my own), and once to some curious raccoons. Now, I don’t take chances.

Keep the area you planted the rhizome in watered, don’t let it dry out completely, but don’t soak the area too much. You should see green shoots as soon as the weather is uniformly warm for a few days in a row.

How to Care for Hop Vines

Keep them watered by watering frequently and lightly, make sure the roots have room to grow, and give them something to climb.

In the the first year you plant, the vines will get to be several feet long, but you will see no flowers. In the winter, the leaves will die, and the plant itself will disappear into the soil. Don’t freak out! This is normal, and your plant is still there, and still alive, beneath the soil.

In the spring, you’ll start to see tiny shoots appear again, like miniature asparagus. Soon, you will notice that you have more vines when you did last year. Some ill be second year vines, some will be first year, as your rhizome has getting birth to more vines than before.

On your second year vines, you will see the telltale little hop flowers, called cones, in the fall. They’ll be green, and tender, until they are ready for harvest.

You will know it is time to harvest your house when they have opened slightly, and you can see the yellow powder, called lupulin, coming out of them. They will also be lighter, and more papery, than they were when still immature. Some will even lighten in color on the vines.

You can harvest by snipping the cones from the vines. Then, you need to dry them fully using your favorite food-drying method before storing them.
Once dried, store them in a plastic zip-topped bag in the freezer and only thaw when you are ready to use them. I recommend weighing your hops and writing the hop variety name, date, and weight on your bags to make it easier to use in your recipes.

More Beer’s Guide to Growing Hops
A good reference for growing and dealing with issues with hop growing.

The Homebrewer’s Garden by Joe Fisher and Dennis Fisher
A comprehensive guide to growing all the ingredients you use to brew.

Brewing Classic Styles by Jamil Zainasheff and John Palmer
A fantastic book for any brewer with a great chart that gives hops flavor profiles, as well as delicious recipes for making your own brews at home without a kit. Makes it easy to make the beer you want, and experiment with flavors and changes to get to designing your own recipes. I love their Belgian Blond recipe especially!

It turns out Calico Critters are the perfect size